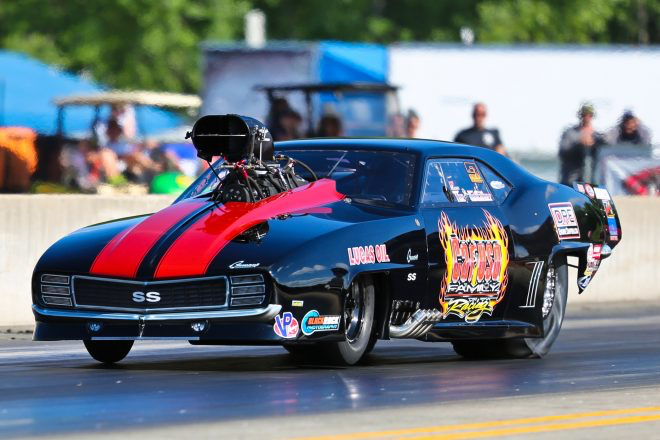 Marc Caruso was being put on the spot, but his answer would have been the same regardless.

The PDRA Pro Boost standout was formally invited to the DRAG ILLUSTRATED World Series of Pro Mod on Wes Buck’s weekly Facebook Live Show, creating a bit of breaking news in the process. But a live invitation can present plenty of possibilities. In this instance, though, Caruso already knew his answer.

“Is that a trick question? It would be our pleasure,” Caruso said on the show. “We’re locking it in. It’s a pleasure to be there and I’m honored.”

With that, you can count another big name for the biggest and richest Pro Mod race in the history of the known universe. It takes place Aug. 10-11 at Bandimere Speedway and Caruso now jumps into the mix of talented racers who will compete for the $100,000 prize.

Caruso’s inclusion also presents an “all-star” element to the WSOPM, adding another top driver from outside the NHRA Pro Mod ranks.

With a top name from the PDRA, as well as the list of stars from the NHRA Pro Mod ranks and others from other associations, it creates a diverse list of talent that Buck, the Drag Illustrated Founder and Editorial Director, believes takes the race to an entirely different level.

“This is a huge deal for us,” Buck said. “For me, to have a representative of the PDRA come out, run quarter-mile, this is a big deal. We are thrilled beyond measure. Marc is a first-class person with a first-class hot rod and he’s a flag-flying PDRA guy, and that’s something near and dear to my heart. Finding a way to incorporate these other organizations into the World Series of Pro Mod and make it an All-Star event, that’s exciting and going to make it really special.”

Caruso has been a standout on the PDRA Pro Boost scene since 2016, piloting the Camaro that Mike Janis, another WSOPM invitee, drove to a second-place finish during the 2015 NHRA Pro Mod scene. Caruso posted two final-round appearances in 2016 and after struggling in 2017, is back on track this year, advancing to the semifinals at Galot in a talent-heavy PDRA Pro Boost class. He’s found a home in the category, one that has helped enable him to compete in an event like the WSOPM, and for that he is grateful. He’s also got his hands on a new hot rod in recent weeks – a Jerry Bickel-built ’69 Camaro.

“That’s what makes it the WSOPM, being able to grab from all those sanctioning bodies,” Caruso said. “Let me just say major thanks to Judy and Tommy Franklin for making the PDRA. We wouldn’t have it if it weren’t for them. I’m extremely grateful to have a place to race, and race as a family and be on the same track at the same event with my daughter. It’s huge and why we choose to race with the PDRA.”

Caruso’s daughter, Camrie, is the current PDRA Top Dragster points leader, coming off a final-round appearance in Martin. She’ll also be at the WSOPM, racing in the $4,000-to-win MagnaFuel Pro Star 16 in Top Dragster.

That’s another incentive for Caruso, who is excited to race as a family on Thunder Mountain. Even with the immense challenges of racing at Bandimere Speedway, the opportunity was too grand to ignore and one Caruso will be savoring for the next two months.

“What can be said about a race like this? There isn’t even words,” Caruso said. “It’s like larger than life.”