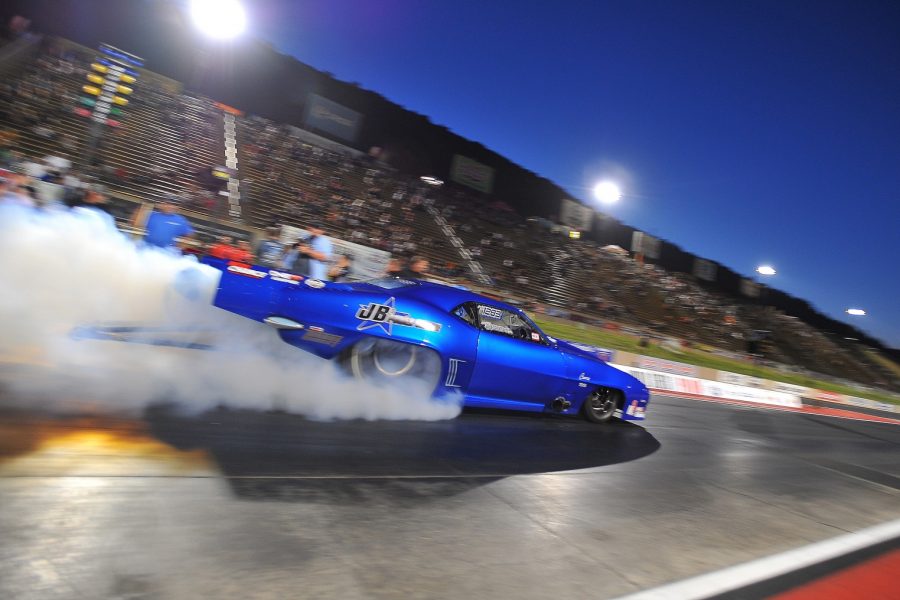 Continuing to build on the momentum of the $100,000-to-win race, having a date secured for the biggest and richest Pro Mod race in the history of the known universe was important for race founder Wes Buck.

“We are extremely excited to announce that the date for the 2019 World Series of Pro Mod has already been set and we will be returning to Bandimere Speedway,” Buck said. “It was important to make an announcement immediately to show just how fired up we are, not only about how this year turned out but what we are expecting in 2019 and beyond. We were just so happy about this year and we wanted to lock in the date for next season.”

A successful debut race took place in 2017 and it continued to grow to a wildly popular level in 2018, as Carl Stevens Jr. claimed the six-figure payday with a thrilling final-round victory over Danny Rowe on Thunder Mountain. In the days following the highly successful race that saw fans traveling from all over the world to take in the must-see action, Buck and race officials worked with Bandimere Speedway general manager John “Sporty” Bandimere III to quickly get the date locked in for 2019. After the inaugural race in 2017, when Mike Bowman became the first Pro Mod competitor to win $100,000, race officials announced the date for the second race in early September. Both deemed it important to be even quicker regarding the 2019 announcement, revealing the date less than two weeks after the World Series of Pro Mod was completed.

“We are thrilled to have the World Series of Pro Mod back for 2019,” John “Sporty” Bandimere III said. “After a great inaugural race in 2017, it was exciting to see impressive growth in all areas in 2018. It’s just as thrilling to have the date announced for 2019 this quickly, and it demonstrates not only our commitment to the race, but also Wes’ dedication in keeping the race at Bandimere Speedway. This is a new drag racing entertainment property for our facility and it has already shown to be a tremendous draw and show, so we’re extremely excited to see where this race goes in the future.”

The second annual Drag Illustrated World Series of Pro Mod presented by J&A Service and benefitting One Cure put on a thrilling show in addition to the invitation-only Pro Mod showdown, as the event also featured the $5,000-to-win Drag 965/Nitrous Outlet burnout contest, the $5,000-to-win MagnaFuel Pro Star 16 and Quick Star 16 Shootouts in Top Dragster and Top Sportsman, as well as racing in the Sunoco King Street and JR Race Car Jr. Dragster categories. In all, more than 150 cars were on Thunder Mountain for the World Series of Pro Mod, as competitors put on an incredible show for the fans at Bandimere Speedway.

“The racing was simply unbelievable and that included every category that ran on Thunder Mountain,” Buck said. “We had drag racers from all over the country coming to race at the event, and fans from all over the United States and the world. That really is incredible to me and that’s something we’re really excited about heading into 2019.”

The goal now is to continue to build on the impressive momentum from the first two events as the World Series of Pro Mod continues to grow. Remaining on Thunder Mountain was imperative for race officials, offering a unique aspect for one of the biggest races of the year. The 2019 World Series of Pro Mod will also include testing leading up the event, as well as the shakedown runs with the scoreboards turned off. They were turned on during eliminations this year – something that will remain for 2019 – showcasing the incredible runs by the all-star list of competitors as they reached the 5.80s at nearly 250 mph. That unique nature of the race and outside-the-box thinking, including drawing for first-round eliminations on Friday, remains important to Buck.

“We want to keep fine-tuning what we do, and our focus is making sure the World Series of Pro Mod remains the biggest and richest Pro Mod race in the history of the known universe,” Buck said. “We had an unbelievable time and had so much fun in 2018, but there’s still a lot left we want to do as far continuing to make the World Series of Pro Mod even bigger and better. There are things that we want to tweak and it’s important to keep building on this incredible momentum. We were really excited with this year and how everything went, and it has us even more confident next year will be even better.”