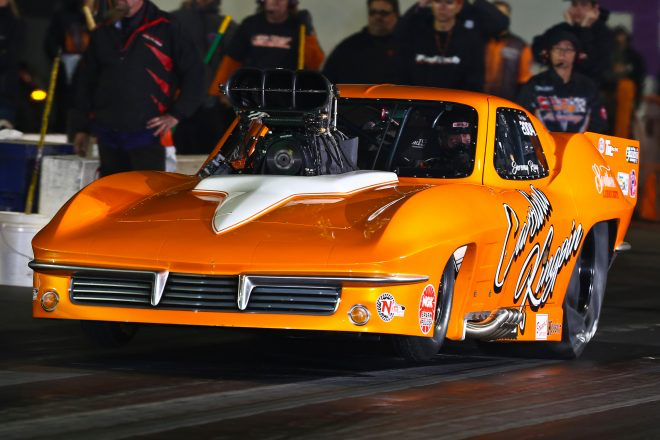 Jeremy Ray is decidedly old-school. From the “Carolina Kingpin” nickname on the side of his orange ’63 Corvette to his “own it, drive it, tune it” approach, Ray is a throwback to the Pro Mod drivers he grew up watching.

He lives close to Pro Mod legend Scotty Cannon, had his Corvette built by Tommy Mauney and wildly respects the approach of veteran standout drivers like Todd Tutterow and Rickie Smith. That old-school demeanor is also why Ray has his sights on competing at the DRAG ILLUSTRATED World Series of Pro Mod, which takes place Aug. 10-11 at Bandimere Speedway.

The South Carolina native has never raced at the Denver-area track, but taking on considerable challenges is what Ray considers one of the hallmarks of old-school Pro Mod racing. Racing on Thunder Mountain qualifies as a considerable challenge, so count Ray invested on trying to tackle it.

“I’m always up for a challenge,” Ray said. “I do race because of a challenge and this will be one I’ve never been involved with before. I think this is where Pro Mods need to be, getting the main spotlight. It’s always good to go somewhere where you’re the main attraction. It’s going to be a cool deal and I’m really looking forward to it.”
END_OF_DOCUMENT_TOKEN_TO_BE_REPLACED