A new challenge has always been appealing for Alex Laughlin.

It’s already taken him to new places like Top Alcohol Dragster, a drag radial car at the biggest radial events in the country and a spot on the popular “Street Outlaws” television show.

Now, that thrill ride curiosity is sending Laughlin to the biggest and richest Pro Mod race in the history of the known universe.

Laughlin, a standout in the NHRA Pro Stock ranks, officially accepted his invitation to the DRAG ILLUSTRATED World Series of Pro Mod, which takes place Aug. 10-11 at Bandimere Speedway. Final details of what he will be driving on “Thunder Mountain” are still being worked out, but, for the time being, that’s beside the point. Laughlin will be in Denver in August in a Pro Mod car with a chance to win $100,000, and that’s more than good enough for him.

“I’m so grateful for the opportunity,” Laughlin said. “It was something I wanted to be a part of, even last year. It is an absolute dream come true, to be honest. Just the whole deal with Wes [Buck] coming to the pits, presenting my dad and I with an invitation – it’s just over the top. It might be the coolest thing that has ever happened to me.

“We’re working out some details on the car that I’ll be driving, but I’ll be there no matter what.”

That need for speed will be quenched in a major way at Bandimere Speedway, as Laughlin makes his Pro Mod debut alongside some of the biggest names in the sport.
END_OF_DOCUMENT_TOKEN_TO_BE_REPLACED

It’s been nearly a year and Steve Matusek still gets an uneasy feeling when he thinks back to the inaugural DRAG ILLUSTRATED World Series of Pro Mod.

It’s certainly not about his overall feelings on the event. That, in Matusek’s eyes, was one of the more enjoyable experiences in the standout’s lengthy career.

But what eats at Matusek is the matter of leaving $100,000 on the table. It’s a predominant thought and one Matusek is none too happy to recall.

“I missed an opportunity,” Matusek said. “I should have won that race. It’s all on me.”

The saving grace is Matusek will get his chance for redemption at this year’s WSOPM, which takes place Aug. 10-11 at Bandimere Speedway. Improving on last year’s semifinal appearance is a clear motivation for Matusek, who hopes to finish the job in 2018.

A year ago, Matusek felt he had the car to beat, running well in testing and early on during the weekend. But he lost on a holeshot to eventual runner-up Steven Whiteley in the semifinals, putting an immediate damper on what otherwise was a thrilling and memorable weekend. “I’m going back with a purpose,” Matusek said. “We felt like it was our race to lose and we lost it. We had a good, competitive car and I got beat by a holeshot. I’m 99.9% percent confident we would have beat (Mike) Bowman in the final round if I would have done my job. We want to get back there and pick up where we left off.”
END_OF_DOCUMENT_TOKEN_TO_BE_REPLACED Despite the intense pressure of trying to win $100,000 on “Thunder Mountain” and staying focused to do so, Molinari had no problem enjoying himself, which is, ultimately, priority No. 1 when he attends a race.
END_OF_DOCUMENT_TOKEN_TO_BE_REPLACED

Eric Latino discovered last year, when DRAG ILLUSTRATED Founder and Editorial Director Wes Buck puts on an event, he doesn’t play. The World Series of Pro Mod, hosted at Bandimere Speedway for the second consecutive year, is Aug. 10-11 and the Canadian Pro Mod ace looks to build on his round win there from last year.

Latino has been re-invited to the second running of the event, as have all the racers from last year. More than just a race, the DRAG ILLUSTRATED World Series of Pro Mod is a gathering of the best of the best in Pro Mod racing. So it goes without saying (but I’m going to say it anyway), getting invited is a big deal.

“It’s one thing to tell somebody ‘Hey man, I want you to come to my race,’” Latino said Monday during a phone call. “But he handed me an envelope with my name typed and printed on there, so he already had plans to have me there before he even came to Charlotte.

“That was pretty exciting because I didn’t realize…he was going to have the same 15 invited out. I thought he might pick a whole new crew just to change things up, so I was pretty excited to be invited again.”

With upwards of 30 drivers regularly attempting to qualify for one of 16 spots at the 12 NHRA Pro Mod races, there is no shortage of doorslammer vets ready and willing to compete against the best of the best. Latino said Buck explained why he and his fellow drivers were chosen for the second running.

“What Wes [Buck] told me is, that he’d literally rather not have the race than not have the original guys back out for the second-running; that our participation in the inaugural event meant that much to him,” Latino said. “And that means a lot to me and my whole team. We can’t wait.
END_OF_DOCUMENT_TOKEN_TO_BE_REPLACED

Derek Menholt: “My Entire 2018 is Planned Around WSOPM”

Derek Menholt figured he had a spot secured for the 2018 DRAG ILLUSTRATEDWorld Series of Pro Mod. After all, the Billings, Montana, native did claim the $10,000 Aeromotive Wild Card Shootout at the inaugural event a year ago, winning his way into the main event. But Menholt still hoped for official confirmation when a certified letter showed up from DRAG ILLUSTRATEDFounder and Editorial Director Wes Buck inviting him to participate in this year’s running of the event.

Just like that, Menholt had his marquee event for 2018 secure.

“I really wanted to do it because it would be our Super Bowl for the year,” Menholt said. “This is definitely the U.S. Nationals for our team. There’s not a race I would rather be at. Until that letter showed up, I was nervous, but I was really excited to get that letter from Wes inviting us to come. I was extremely excited.”

This time, Menholt won’t have to race his way into the main event of the World Series of Pro Mod, which takes place Aug. 10-11 at Bandimere Speedway just outside of Denver.

His participation in the inaugural place secured Menholt’s spot in the main event for 2018, Buck’s way of saying thanks for believing in the race and the vision he had for holding the biggest and richest Pro Mod race in the history of the known universe.
END_OF_DOCUMENT_TOKEN_TO_BE_REPLACED 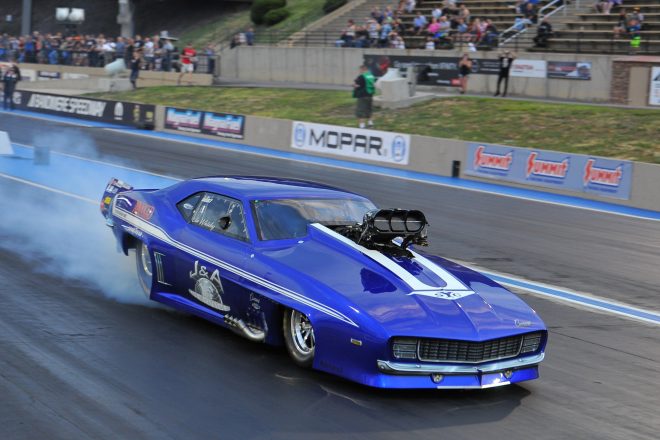