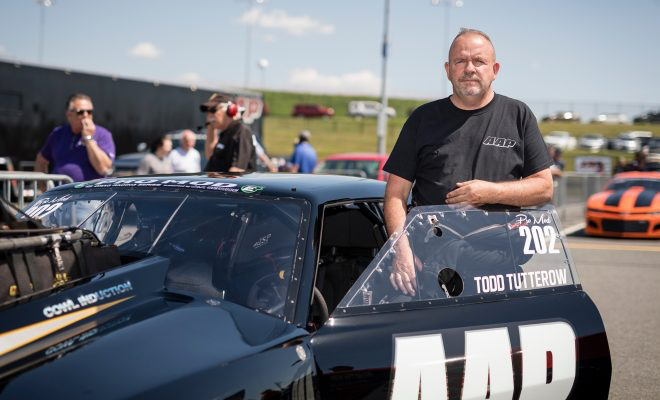 Todd Tutterow has had success in almost every situation in what has been a spectacular Pro Mod career. But when it comes to big-money, high-stakes races, Tutterow has been elite.

He won the $50,000 North vs. South Big Dog Shootout in 2004 and was a runner-up two other years, oozing cool and thriving when others might wilt under the pressure.

Now, he’s locked in on the $100,000 up for grabs at the DRAG ILLUSTRATED World Series of Pro Mod, accepting his invitation for the biggest and rich Pro Mod race in the history of the known universe on Aug. 10-11 at Bandimere Speedway.

The bigger the stakes, the more excited “King Tutt” gets and it doesn’t get bigger than racing on Thunder Mountain for a six-figure payday.

“I like running for the big money and I seem to do well at that type of race,” Tutterow said. “We always go to win. If you just want to qualify and go a couple of rounds, that’s not for me. To race for $100,000 and a big check, that’s what we like. It’s very, very exciting.”

Tutterow is the latest marquee name to commit to an event that has captured the attention of the Pro Mod and racing world since the debut race a year ago.

That now includes Tutterow, who committed earlier this month and is set to make his debut at Bandimere Speedway, which obviously presents a litany of challenges for first-time drivers.

But solving those types of issues and racing well in any type of conditions has been the hallmark for Tutterow’s success over the years. He’s won various world championships across the world, and his mind is already working toward what it will take to succeed on Thunder Mountain racing at an elevation of nearly 6,000 feet.

“I’ve got an idea of what I want to do, but you still have to go out there and do it,” Tutterow said. “We’ll go out early enough to test and do what we can, but that will be a challenge. We’ve raced at Bristol and Topeka this year, and we have raced in Vegas at elevation, so we do have an idea.”

Tutterow has also been a master at excelling in adverse conditions. That comes from a wealth of experience that dates back 30 years over different classes and organizations, but Tutterow’s mindset has often given him an advantage over top-notch competitors.

It’s led to championships in the ADRL, the Arabian Drag Racing League, Mean 16 and Quick 8 Racers Association, among others, and Tutterow has always had confidence in his ability to rise to the occasion.

“It’s the best of the best racing for $100,000 and that can make you do crazy things,” Tutterow said. “Racing for that much, it’s a rush to the very end. But I feel like I’ve been pretty good at trying to race smart in my career. You have to survive. This type of race is all about survival. If you can’t do what it takes to survive it, you’re not going to do too well.”

Tutterow is also thriving in his first full season on the NHRA Pro Mod circuit, advancing to the final round in Bristol and currently sitting sixth in points.

But Tutterow doesn’t have a NHRA Pro Mod race until the U.S. Nationals in September, giving the veteran plenty of time to prepare for the WSOPM.

That’s not ideal for the competition, but it’s the perfect scenario for fans who can’t wait to see Tutterow race for the first time in the Denver-area. Drag Illustrated Founder and Editorial Director Wes Buck is among that group, and he was excited when he got official confirmation from Tutterow. It was an identical reaction for Tutterow, who will look to steal the show in August.

“We’re thrilled to death and when we told Wes we were going, he was thrilled to death, too,” Tutterow said. “You always want to be that top dog when you go to the track, and this race, the Pro Mods are the top dog at the track. That’s very exciting.”