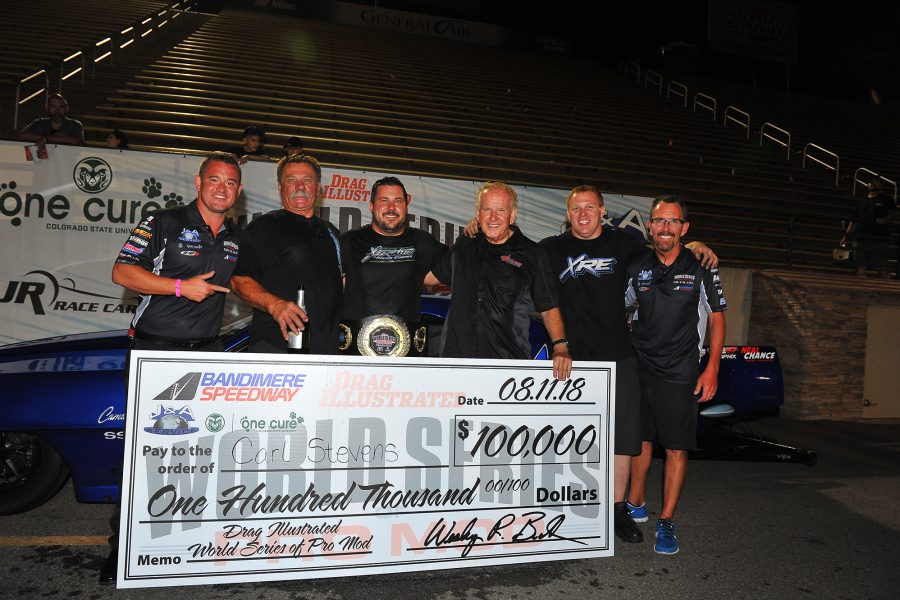 On the strength of one incredible performance after another on Saturday, Carl Stevens Jr. came up victorious at the Drag Illustrated World Series of Pro Mod presented by One Cure and J&A Service at Bandimere Speedway, knocking off Danny Rowe in a thrilling final round to be crowned champion and earn the $100,000 payday.

Stevens went a blistering 5.856 at 246.26 mph in his turbocharged ’69 Camaro to best Rowe’s 5.949 at 242.54, claiming the quickest run in the two-year history of the World Series of Pro Mod in the process. It set off a memorable celebration for the North Haledon, N.J., native and his team, soaking in what it meant to win the biggest and richest Pro Mod drag race in the history of the known universe.

“This is easily the biggest event win we’ve ever had,” Stevens Jr. said. “Being on the biggest stage for Pro Mod and getting the win, it’s just incredible. That’s really what it’s all about. The money certainly doesn’t hurt, obviously, but on this grand stage that we’ve been given, in my opinion there’s nothing bigger.”

Stevens also shared the winner’s circle celebration with his father, Carl Stevens Sr., which added to the magnitude of the moment for the Pro Mod standout, but he put together five impressive wins in eliminations to get there.

Stevens opened Saturday with a 5.93 at 245.94 in the Jim Bell-owned Camaro to knock off Marc Caruso, setting up a must-see matchup with two-time NHRA Pro Stock world champion Erica Enders. Stevens went 5.897 at 246.66 to slip past Enders’ 5.922 at 243.99, continuing that improvement in his quarterfinal showdown with defending event winner Mike Bowman.

The two turbo-powered talents provided the most thrilling side-by-side duel of the weekend, as Stevens’ 5.880 at 246.21 ousted Bowman’s 5.912 at 249.03 by a mere .007. From there, Stevens beat Michael Biehle when he went red, running a quicker 5.863 at 245.90 to move into the final-round matchup against Rowe. Stevens again dialed up another spectacular run in his Xtreme Racing Engines-powered Camaro, tracking down Rowe after the veteran left first.

“I was pretty jacked up inside the car,” Stevens said. “The people probably heard screaming inside the car as I was turning off the track. I was pretty pumped up. I wanted to see if I could pick it up a little more (in the final). As the tuner, I was looking at the data and thought I could make it go a little better so I had to try. I was pretty confident in the tune-up.”

Stevens was on a roll throughout eliminations following his strong blast on the final Summit Racing Shakedown run on Friday night. In all, he improved during all five elimination runs, knocking off a standout list of talents en route to the six-figure payday and custom World Series of Pro Mod championship belt.

“We knew it was really fast and we knew we could go a little bit faster if we had to,” Stevens said. “We were really pretty confident and just trying to not beat ourselves. We’ve just been trying to connect the dots and put it all together and what better place to put it all together than here. Everything just fell together against some huge names.”

It also made for a rewarding winner’s circle celebration for car owner Jim Bell, a Pro Mod veteran who was thoroughly impressed with how the team worked together against marquee competition.

“It’s the biggest win ever,” Bell said. “It’s so exciting to win this and every round was tough. We faced some great drivers. The race against Mike could have gone either way and luckily it went our way. As far as winning this, it’s a team effort and we’re a solid team. We were consistent and going fast in the heat of the day. Danny did a great job (in the finals) and drove a really good race.”

Rowe performed at a high level in his RJ Race Cars Camaro, taking out standout Shane Molinari in the opening round, 2017 WSOPM runner-up Steven Whiteley in the second round and WSOPM Drag 965/Nitrous Outlet burnout champion Stevie Jackson in the quarterfinals. A solo pass after Brandon Pesz broke in the semifinals sent Rowe to the final round where he put together his best pass of the weekend in the Jimmy Rector-tuned Camaro. It wasn’t enough to top Stevens, but there were plenty of positives for Rowe.

“The whole day has been a struggle and a fight, and my crew did a great job and I was able to drive a good race car today,” Rowe said. “We’ve got a great foundation (for this race). The fans were great and it was fun, and it’s just a matter of building on it.”

A year ago, Stevens watched the WSOPM with the hopes of racing at the event in 2018. He made the most of out, finishing his thrilling debut at Bandimere Speedway with a $100,000 check and a plethora of amazing memories. Included in that is one that will stay with him forever.

“The biggest thing is all the racing I do with my dad,” Stevens said. “Having him here and being able to win this huge event, the biggest event of our lives, together is something I’ll never forget. It’s just awesome memories.”

Over 32 Top Dragster drivers showed up to compete in the $5,000-to-win MagnaFuel Pro Star 16 Shootout, but two out-of-state competitors were left standing when the final round rolled to the starting line. Grant, Nebraska’s Kasey Kroeker posted the win in his nitrous-assisted Spitzer dragster when Matt Sackman left .001 too soon in his Channahon, Illinois-based Spitzer entry. Kroeker ran 6.635 on a 6.65 dial-in.

With a surplus of Top Dragster racers on the property for the MagnaFuel Pro Star 16 field, a second MagnaFuel Shootout class was added to accommodate another 16 drivers. In the final round, Bob Ross left the starting line just .002 ahead of Rick Milinazzo and ran 6.689 on a 6.68 dial-in to defeat Milinazzo’s 7.342 on a 7.33 dial-in.

Local Jr. Dragster competitors battled it out in the JR Race Car 7.90 Shootout final round, with Thornton’s Kayleigh Hill using a holeshot advantage and 7.946 at 80.34 to defeat Lauryn Sipes and her 7.915 at 81.99.

Eight racers competed in the One Cure Reverse Race, where street cars race in reverse to the 330-foot mark. Brothers Matt and Zach Sackman squared off in the final round, with Zach taking the win. The $800 in entry fees were donated to One Cure.